Launched in 2016, Tria Express has been a production workhorse that has underpinned many important broadcasts and live events. 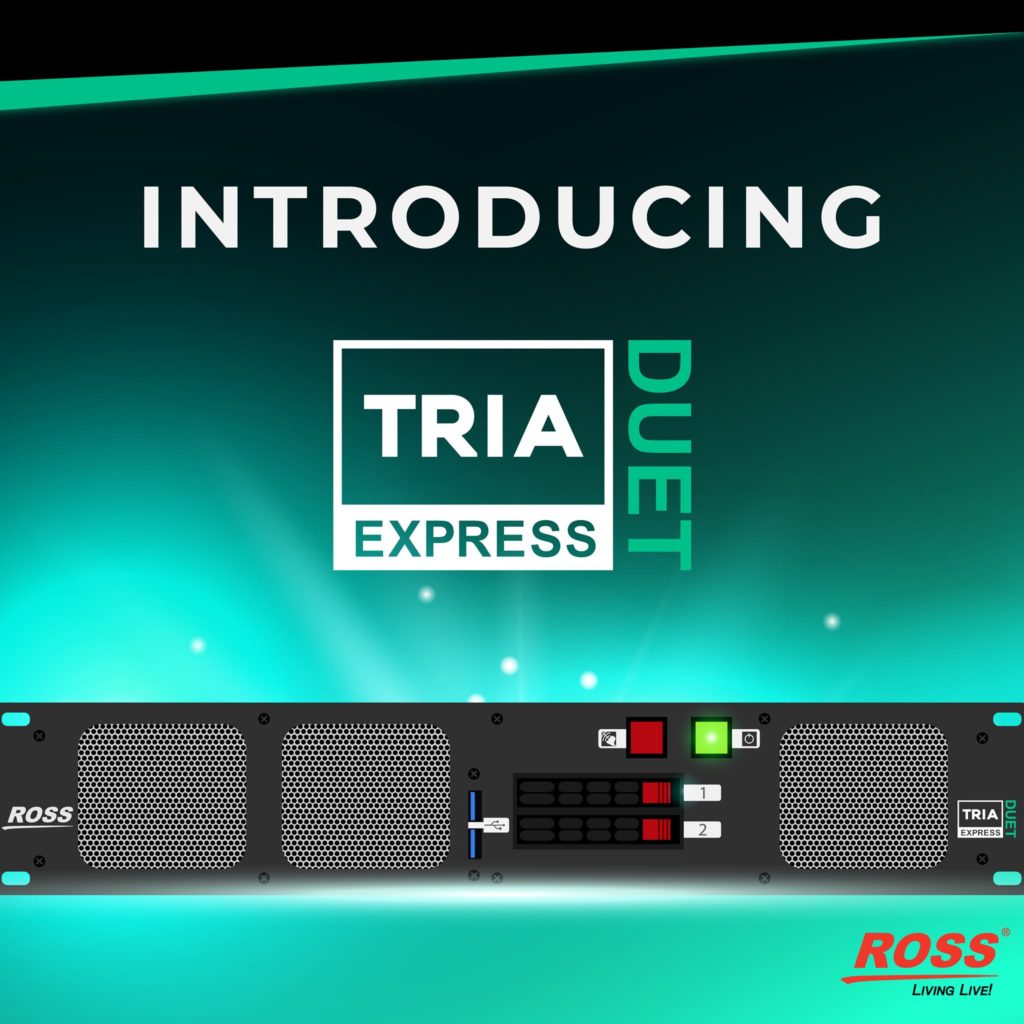 Over these five years, Ross has systematically gathered customer feedback and input into the next generation solution, and we’re now very pleased to announce Tria Express Duet. Housed in a similar 2RU chassis and built on the same reliable video hardware as its predecessor, Tria Express Duet expands the number of possible video I/O configurations up to fifteen channels, providing even greater flexibility. Two software options are available with the hardware:

Tria Express Duet also features a built-in MultiViewer. In addition, a two-channel Tria Express Duet can be upgraded in future to four-channels (two record/playout with two payout only) via a convenient software license.

Michael Kljucaric, Associate Product Manager for Servers at Ross, is very pleased to announce the new solution. “We believe that Tria Express Duet meets the need for a compact video server with between two and four channels. Fifteen preset channel configurations allow Tria Express Duet to be quickly changed from one operational mode to another, and the added MultiViewer (which can be undocked and moved onto an extended desktop computer display) and highly intuitive user interface make it a delight to use. Combined with powerful standard features such as timecode chase and single-file architecture for fill/key and ISO-2 video content, the Tria Express Duet is the ideal solution for a wide variety of different workflows. And at a price that’s even more accessible than the outgoing product, we really think our customers are going to love this new model!”

Would you like to know more about this product?

Fill out this contact form and we’ll get back to you as soon as possible.

Cookie policy
We only use functional (or required) cookies that are necessary for this site to function, including those that are necessary for Google Analytics to work. We do analyse the use of this website to measure the audience but it is de-identified data. In other words, we don’t know who you are.
By clicking “Accept All”, you consent to the use of ALL the cookies. However, you may visit "Cookie Settings" to provide a controlled consent.
Read More : https://concilium.co.za/privacy-policy/
Cookie SettingsAccept All
Manage consent

This website uses cookies to improve your experience while you navigate through the website. Out of these, the cookies that are categorized as necessary are stored on your browser as they are essential for the working of basic functionalities of the website. We also use third-party cookies that help us analyze and understand how you use this website. These cookies will be stored in your browser only with your consent. You also have the option to opt-out of these cookies. But opting out of some of these cookies may affect your browsing experience.
Necessary Always Enabled
Necessary cookies are absolutely essential for the website to function properly. These cookies ensure basic functionalities and security features of the website, anonymously.
Functional
Functional cookies help to perform certain functionalities like sharing the content of the website on social media platforms, collect feedbacks, and other third-party features.
Performance
Performance cookies are used to understand and analyze the key performance indexes of the website which helps in delivering a better user experience for the visitors.
Analytics
Analytical cookies are used to understand how visitors interact with the website. These cookies help provide information on metrics the number of visitors, bounce rate, traffic source, etc.
Advertisement
Advertisement cookies are used to provide visitors with relevant ads and marketing campaigns. These cookies track visitors across websites and collect information to provide customized ads.
Others
Other uncategorized cookies are those that are being analyzed and have not been classified into a category as yet.
SAVE & ACCEPT
Scroll to Top